I wrote this as an answer to a question on Quora, Has there ever been a time when doctors were widely mistrusted (as a whole)?

It might be perhaps accurate to say that healers in general – or doctors as we would call them today – have never received complete, unadulterated trust from the public any time in history (including today). People did trust and respect individual healers, but they also were suspicious of and dismissed a good many others.

The story of nineteenth century United States is particularly telling. This was a period of “free trade in doctoring.” [1] The stage for this was set in the earlier century, when a scarcity of doctors, among other things, had encouraged tremendous self-reliance in terms of medical matters. People began self-treating more often and gradually started to take that to be a most desirable state of affairs. A popular book then was titled “Every Man His Own Doctor” (The name of course makes invisible the work of women who were more often than not the primary healers and carers in families.) Image courtesy National Humanities Center 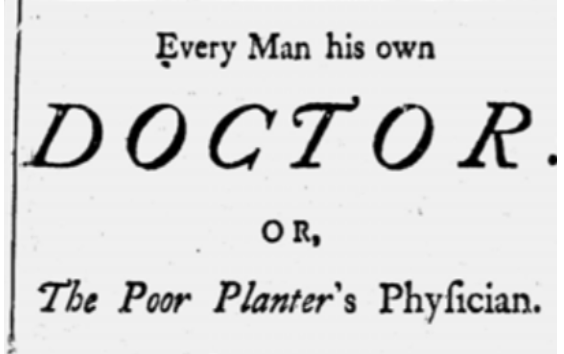 One point of origin of this state of affairs is a doctor named William Buchan. He was a high-placed physician in Britain, a member of the Royal College of Physicians of Edinburgh. His 1769 book Domestic Medicine became very popular and influential in the USA, and remained so until the mid-1800s. Buchan was a unique physician in that he did not believe in the monopolization of knowledge: “The fears, the jealousies, the prejudices, and the interests of the [elite physicians] are, and ever will be, the most effectual obstacles to the progress of any salutary discovery.” He believed that professional knowledge and training were unnecessary in treating most diseases, and that a doctor was indeed valuable but on only rare occasions. [3]

More damning – and highly relevant even to our times – were the arguments of John Wesley, an influential thinker of the mid-1700s who founded a new religious reform movement: Methodism. To quote from sociologist Paul Starr’s history of the American medical profession:

In former times, thought Wesley, people had treated themselves, but the physicians then concocted complicated theories to confuse ordinary people. “Physicians,” he wrote, “now began to be had in admiration, as persons who were something more than human. And profit attended their employ as well as honour… To this end . . . [t]hey filled their writings with abundance of technical terms, utterly unintelligible to plain men…”

These are but two among multiple examples of people in the mid- to late 1700s developing a culture of skepticism against esoteric medical knowledge and the purveyors of that knowledge: the doctors.

The last straw came in the early 1800s in the form of political action, with the ascendancy of Andrew Jackson the seventh President of the US (1829–1837). As part of what is known as the Jacksonian democracy ideology, many far-reaching changes occurred in the US, including state action against exclusive privileges and elitism. This was a political environment not at all tolerant of special licensing for medical practice. One politician declared: “A people accustomed to govern themselves and boasting of their intelligence are impatient of restraint. They want no protection but freedom of inquiry and freedom of action.” In other words, any person who wants to practise as a doctor should be free to practise as a doctor: there is no need to limiting practice rights to an exclusive community of licensed doctors.

State legislatures were still enacting licensing laws in the 1820s; then they began rescinding them in quick succession. Illinois empowered medical societies to issue licenses in 1817, modified the law in 1825, and abolished licensing the next year. In Ohio, licensing was introduced in 1811 and repealed in 1833. Licensing laws, or penalties for the unlicensed, were dropped in Alabama in 1832, Mississippi in 1836, South Carolina, Maryland, and Vermont in 1838, Georgia in 1839, New York in 1844, and Louisiana in 1852. Several states, including Pennsylvania, never had any licensing.

To sum up, in the cultural and political milieu of those times, American doctors could not win the trust of the public and make them feel confident that they – the doctors – indeed possessed special, socially important, and individually useful skills and knowledge. For Americans then, there was nothing particularly exceptional about the activities and ideologies of their doctors. This general mistrust would continue for several decades until new developments in medical science, coupled with changing (as always) social and political norms, finally presented doctors with numerous special skills, access to highly complex knowledge about the human body, and immense trust and respect.

This widespread confidence in the “blessings” of medical science did not of course last long. With the influential critiques of Rachel Carson and Ivan Ilich began, since the 1960s-70s, another long period of skepticism which continues to this day.

[3] The Social Transformation of American Medicine