[Reference for the details below and image: Death of a President | NEJM]

The year is 1799, the month December. A wealthy old man somewhere in Virginia begins to feel some discomfort in his throat and runs a temperature. He is fragile, often gasping for air as he finds breathing more and more difficult. Not long after, his doctor is right there beside him in the bedroom. And then another. And then yet other. Our patient is such a massively influential elite that in no time three doctors have gravitated to his bedside to take care of him – and a fourth is on his way.

These doctors have taken the necessary medical history and are considering options for treatment (it is 1799, there’s no paracetamol yet – or HCQ tablets for that matter). They decide to try out the best, most tried and tested, and most trusted therapeutic option: bloodletting. 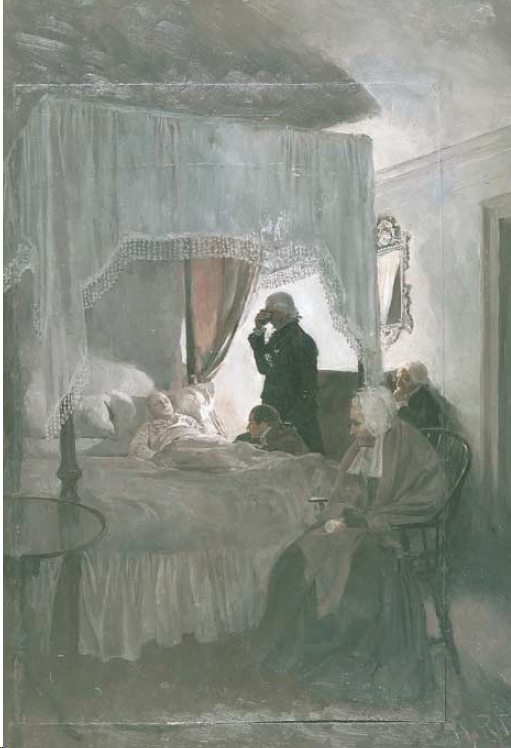 By around 7.30am, our 67-year-old patient had already undergone the procedure: some 400ml of his blood had been eased out of his veins (again, it is 1799, so no needles and syringes etc. – just a simple lancet and a cut). At 9.30am, the seniormost among the doctors takes out another 530ml blood. At 11am, yet another 500ml. At 3pm the veteran doctor, in all his wisdom, draws out some more blood – 946 ml to be exact – though this time we see the other doctors voicing some misgivings.

All in all, the bed-ridden George Washington has about 2.5 litres of blood taken out of his body in the span of half a day. That is around half of an adult human’s entire blood volume.

Despite these ‘heroic’ efforts, our patient dies in the night around 10.30pm. The next morning, newspapers carried front page news of his death. After all, the much young and proud nation of the United States of America had lost its much-loved and feted general, and inaugural president.

How did such an elite, important personality end up dying in such bizarre circumstances?

Well, bizarre perhaps for just us. One of the most amazing things that historians (of medicine) have accomplished over the past few decades is to look at doctors and people from the past with more empathetic and reasonable lenses, and to try understand why exactly it made sense for them to do the things they did. This ‘contextual’ approach has replaced, at least in academic history-writing, the generally judgmental approach wherein we look at such past therapies and simply see ‘primitiveness’ in them.

In this case, however bizarre it sounds to us, it absolutely made sense for Washington’s doctors AND for Washington himself to perform the bleedings. After the 7.30am bloodletting, the former President himself had, in fact, requested for more blood to be taken out. Such was his – and of people in general – confidence in the healing powers of bloodletting. The doctors who attended him were the most experienced and respected in their fields. They too did not think there was anything problematic or bizarre in drawing blood from an old patient running a fever and having throat discomfort (though there was some debate on exactly how much blood needed to be drawn out).

Today we believe that Washington died most probably of a combination of epiglottitis and its complications, to which was added the hypovolemia from the bloodletting.

To know more about why exactly people in the past, for thousands of years and in multiple civilizations, believed bloodletting to be a legitimate therapeutic practice, this particular piece is helpful: British Columbia Medical Journal.