[Throughout history epidemics have served as excellent windows into social and cultural beliefs and norms. While this contagion-catalyzed uncovering of a society’s implicit and explicit thought processes helps historians understand past societies in better ways, for present societies it can potentially be utilized as a way to understand our hidden biases, prejudices, and even kindnesses. Besides, epidemics could make our anti-intellectual society finally start listening to intellectuals, activists, and academics who have always tried to drive our attention to fault-lines that we don’t take seriously before a crisis (like COVID-19) ultimately bares them open for all to see. My attempt here is to collate different media and personal narratives from the COVID-19 epidemic in India that throw light on the social and cultural aspects of how we have reacted (and will continue to react) to this crisis. There are a lot of lessons we can learn and implement, but whether we do that or not is, again, dependent upon what general direction our sociocultural norms take as the epidemic progresses and dies down.]

THE Indian bureaucratic and political ideas about individual human dignity and respect were on full display in Mumbai when city authorities began stamping with ink the hands of asymptomatic people who had been advised to self-quarantine. The Indian Express reported that “the Maharashtra government on Monday began marking all those who have been medically advised to self-quarantine with a stamp… in a bid to ensure they isolate themselves for 14 days. The ink is the same that is used to mark voters at elections.” The photo below is from the Mumbai Corporation’s Twitter handle: 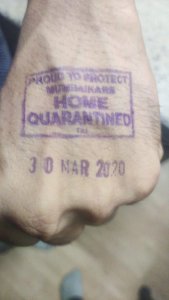 THE virus has also underlined the overwhelming online presence of desi ‘vegetarian’ propagandists – an offshoot of whom have succeeded in harming India’s children by ensuring that they don’t get to eat eggs. Many Indians have by now been led to believe that they should not be eating eggs and other non-vegetarian food since these can cause you to be infected with the novel coronavirus. This is ironic considering that eggs could be a great and inexpensive source of protein for many Indians to help the body fight the infection. Here you can read about a doctor trying to bust this and other related myths in India.

THE novel coronavirus is also providing novel fodder for racism and xenophobia in India (and the world over). A report on the kinds of Whatsapp forwards doing the rounds in the country discussed how “racist comments mocking the eating habits of Chinese people as ‘abnormal’ and ‘weird’ have spread on social media. These often have a religious slant, calling on Chinese to ‘eat only crops which are grown in a healthy way … not abusing animals’ and end by extolling the virtues of Hinduism.”

IN what is by far the most remarkable commentary on Indian society and culture, many COVID-19 suspect persons – almost all of them well-to-do Indians who had flown in from a foreign country – have fled from the quarantine facilities (or ‘isolation wards’) of government centres where they had been admitted to. People have also been posting pictures and videos on social media of the unlivable conditions there. (See this Scroll report for pics and more details.) Once this became apparent, a typical Indian ‘solution’ to this problem was devised: social stratification. The well-to-do will get to use ‘high-end’ hotels (see here and here) as their quarantine zones, while the rest of India will continue to feel grateful for the unlivable government wards.

Not long ago, India and much of the world were put under stress by an epidemic of plague in Gujarat (the city of Surat). The social responses to this epidemic were similar to what people’s responses have been to epidemics all through history. This essay provides a good brief description of that period (an excerpt below), and this piece by journalist Patralekha Chatterjee discusses how city authorities in Surat responsibly implemented public health measures in the plague’s aftermath).

One-fourth of Surat residents (400,000 to 600,000 people) fled the city within four days of announcement of the epidemic. Among them were people still in the incubation phase of the plague infection. Broad-spectrum antibiotics required to curb the disease had been exhausted due to panic buying of medicines. Physicians and pharmacists escaping the city took with them large amounts of antibiotics for their friends and relatives… In the capital of New Delhi, the lack of public information on how to deal with the spread of the disease resulted in the large scale purchase of surgical masks and tetracycline. As a precaution, the administration ordered the closure of all schools and public entertainment places. The news of the epidemic and these actions taken by the government alarmed many people. Some chose to stay indoors and others who ventured out did so with masks covering their faces. Schools in Delhi reopening only five days after they were closed illustrated the uncertainty of government officials as of how to proceed with the precautionary measures.